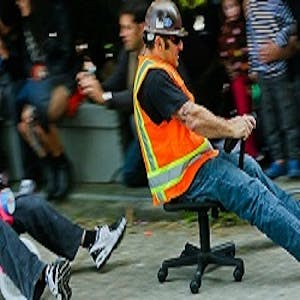 From a small town in Japan, and quickly spreading through Eastern Asia, office chair racing is really starting to take off as a competitive sport.

Beginning in a small town called Kyoto, the racing started in a shopping centre, asking shoppers to join in in this ‘childhood memory’ evoking race. The first race saw 32 teams of 3 gathered for the 180 metre course in the Kirara shopping arcade.

The success of this turnout quickly began to spread, drawing the attention from other shopping districts across Japan. Isu-1 is now an annual event at Kirara shopping centre after its huge success.

These races are called Isu-1 Grand Prix, which is a pun on the Japanese word ‘isu' for chair and Formula 1 racing.

So far there have been races organised in 12 cities all across Japan, with wide spread media coverage and a large number of viewers.

In April 2016, the first overseas race was held in a shopping district in Tainan, Taiwan, and with over 100 teams and 100,000 viewers, it was considered even more exciting and successful than those in Japan.

While these races only use commercially available office chairs, casters often tire out and back and armrests have been known to break after several collisions. There has even been a ‘vehicle and equipment inspection’ organised to ensure every members chair is safe and they have the right head protection.

Even though this was an event to be organised to promote and revitalise a shopping district, it has now turned into a widely known competition.

At Yorkshire Office Group, we specialise in bespoke and unique office furniture. If you’re business is in the Leeds, York, or Wakefield area, and are looking to upgrade your office furniture (or even start your own office chair racing games), please contact us on 01924 888 800.